Looking for competitive home and office removals Watford? ​Moving Herts is a full-service removals company servicing Watford, Hertfordshire. We’re a friendly face that offers home and business moves throughout the UK, Europe and International destinations. Whether you’re moving house or undergoing office relocation, we are a professional removals company that provides the full range of removal services.

From start to finish, our professional movers are certified and trained to make the your house or office move go as smoothly as possible.
Let us help you with your move.
We promise satisfaction and guarantee a stress-free experience from pick up to delivery.
​
​CALL  01923 927 983 TODAY ON FOR A FREE MOVING ESTIMATE
CALL 01923 927 983 NOW

If you’re looking for a moving partner for a local, long distance or overseas move, we are here to help. We will communicate with you throughout your move, making sure you understand every step of the process, so you can focus on all the other important tasks.

For dependable and affordable removals in Watford, let us help you with your move. We offer a stress-free moving experience from pick-up to delivery. ​​

Get ready to move 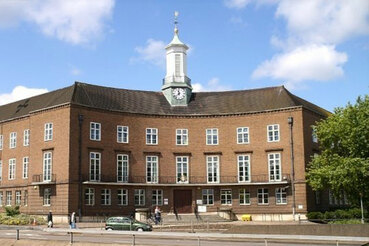 Watford is a town and borough in Hertfordshire in the South of England, which lies only 15 miles to the northwest of central London. The Watford Borough Council is lead by the elected Mayor of Watford, along with three representative councillors from each of its 12 wards.

Transport to and from Watford
The town has good transport links to London and the rest of England, with an enviable proximity to the UK’s transport network. Watford is inside the M25 between junction 19 and 20 and just west of the M1 at junction 5. Access to Heathrow and Luton Airports are both less than 20 minutes by car. There are plenty of car parks within the town centre.

Watford is well served by mainline trains and also the tube into London. There are 3 stations in Watford. Metropolitan Line runs out of Watford station, while the Overground line runs into both Watford High Street and Watford Junction. Watford Junction also provides National Rail service into London Euston,

The tube provides easy access to Cassiobury Par. While Watford Junction provides the most convenient access to the Clarendon Road business district. Watford High Street station is within close walking distance to Watford’s Shopping Centre and retail parks. There are also a number of bus services running to Watford.

Leisure
The town has its own football team, Watford FC, which is based at the Vicarage Road Stadium watfordfc.com

There are many fantastic shopping opportunities in Watford including the intu Watford shopping centre, Watford Market and the High Street.

Watford For You – What’s On in Watford and information on shopping, art and culture, transport, bars and nightlife, hotels, parks and green spaces and much more: watfordforyou.org

Businesses in Watford
Business is thriving in Watford and the town of Watford contains corporate head offices for many national companies including Mothercare, J.D. Wetherspoon, Bathstore, Camelot Group, and Caversham Finance. Watford is home to various multinational companies including Costco, TK Maxx, Total Oil, Vinci and Beko and Hilton Worldwide.
WHAT ARE YOU WAITING FOR?

If you are moving Home or Office in Watford

Call for a free, no obligation quote